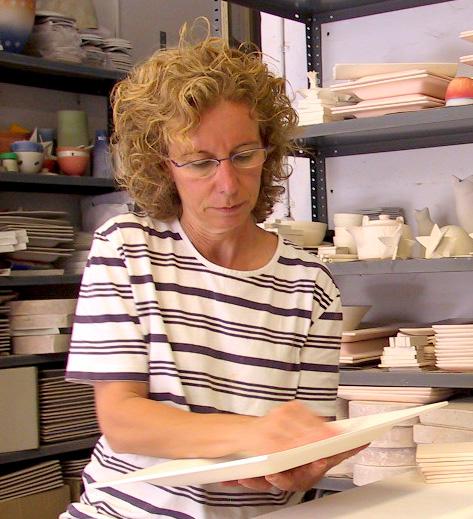 In 1981, after completing his studies at the School of Applied Arts and Crafts in Barcelona (Escola Superior de Disseny i Art Llotja), Eulàlia Oliver cofounded Bugambilia Workshop, fully dedicated to the creative ceramics, with two classmates. The influence of printmaking and drawing, as well as the study of the volume and sculpture, that was topics of various courses she has done, apart from a constant experimentation, lets she easily move between the different disciplines with a common base, the use of the ceramics as raw material. The ceramic surfaces sometimes modelled in extremely fine surfaces, close to a fabric or glass, on which the artist draws figures that impress with their simplicity.

The first feeling of these pieces is their fragility. It's just an initial feeling. Close examination allows a reading of the qualities that each work in isolation offers. The first perception is tactile, but not in the classical sense, I mean, them do not invite to be touched - their apparent fragility keeps us lurking - but evidence that someone has touched them previously. And that it has been done very carefully.

A further sensation: lightness, in the sense proposed by Italo Calvino, to eliminate weight, to do not leave trace. As if the artist was working in the pieces undressing the materials, looking for what it is inside, just like a sculptor does with a piece of marble.

One last feature of her works is the ability to limit the space. To mark boundaries.